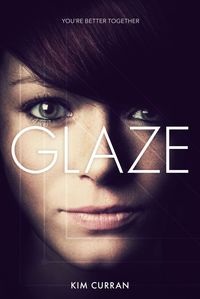 Petri Quinn is counting down the days till she turns 16 and can get on GLAZE – the ultimate social network that is bringing the whole world together into one global family. But when a peaceful government protest turns into a full-blown riot with Petri shouldering the blame, she's handed a ban. Her life is over before it's even started.

Desperate to be a part of the hooked-up society, Petri finds an underground hacker group and gets a black market chip fitted. But this chip has a problem: it has no filter and no off switch. Petri can see everything happening on GLAZE, all the time. Including things she was never meant to see.

As her life is plunged into danger, Petri is faced with a choice. Join GLAZE... or destroy it.

Glaze was published as a signed, limited edition of 75 copies, bound in gilt-stamped black buckram with a dust jacket designed by Regan Warner.

"This is an edge-of-the seat cyber thriller that will scare your socks off." - Books LIVE

"A hugely enjoyable read that pushes the idea of social media to its limits... Curran's finest piece of work yet" - Starburst

"Curran’s portrayal of an Internet-on-steroids feels timely and relevant. It is a deliberately exaggerated technology environment carrying an understated vein of social commentary which should engender debate amongst the target YA readership; the author weaves this in making it feel naturalistic and without ever becoming heavy handed." - British Fantasy Society

"Kim Curran’s latest, Glaze, combines the struggle to fit in that every teenager has with the rise of social media to create a thriller that manages to hit the same sort of ground as Doctor’s Homeland and Veronica Roth’s Divergent series, with a perspective and approach all its own.... It’s an intensely clever, uniquely sweet and completely involving story and one that feels uniquely timely in a way that won’t date." - Alasdair Stuart

"I really loved Glaze. It’s very different from Curran’s Shift series, but it shares its snappy dialogue and great pacing. I also liked the fact that this is definitely a standalone story with a finished story arc and resolution, but with the sense that the story will go on without us. If you enjoy near-future SF and socially-aware stories, Glaze is just the ticket." - A Fantastical Librarian

"That’s what Glaze is for me: a world close to ours, where something suspicious is layered with excitement and buzz, veiled with a sparkling façade that dazzles and draws the eye away from the main event taking place just off-stage. And I loved it... Glaze is a smooth, confident novel that really lights the way for YA modern science fiction to follow." - Jet Black Ink

"Glaze is shaping up to be one of my favourite Young Adult novels of the year so far. It’s smart, intelligent, quirky and with some great characters that make it a compelling read." - The Founding Fields

"Glaze not only draws you in, but also leaves you questioning things once you have finished. Glaze is a MUST read." - Much Loved Books

"The best thing about this book is the way it connects with contemporary life, the way this kind of thing could happen if the way we’re going is taken to extremes." - Death, Books and Tea

"A hard-hitting novel that scared me to the core, gave me enjoyment, and stayed in my head for days after reading it" - Daydreamer's Thoughts

"Glaze is an excellent book.  It projects a credible future and reveals the potential all of us have to be complicit in our own downfall. With the novel’s target audience being the most voracious users of social media, let us hope that it give them pause for thought before they unwittingly click their liberties away" - Robin's Books

"This is a fantastic, gripping read. I could throw a lot more adjectives in there but essentially I loved this book. I couldn't put it down and read it from start to finish in one sitting." - Inky Bumblebee

"I loved Glaze so much.... With action, adventure, technology, high running emotions and political undertones, this is one book that you do not want to miss!" - Uncorked Thoughts

Read more about the origins of Glaze at Kim's blog.