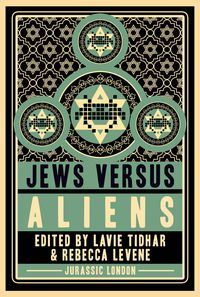 In Jews vs Aliens, editors Lavie Tidhar and Rebecca Levene have gathered together brand new stories from the light-hearted to the profound, with authors ranging from Orange Prize winner Naomi Alderman to Big Bang Theory writer/producer Eric Kaplan, all asking, for the first time, the question you didn’t even know you wanted answered – what happens when the aliens arrive, only to encounter... Jews?

“If you will it, it is no dream!” as Theodor Herzl said: and no doubt he had just such an anthology in mind.

Paperback omnibus edition (with Jews vs Zombies): (Out of Print)

"Bizarre gets kosher" - profile at Telereads. And Starburst. And Boing Boing. And This is Horror.

Lavie Tidhar introduces Jews vs Aliens and Jews vs Zombies on his blog.

Rosanne Rabinowitz, on the background to "The Matter of Meroz".

Interview with Matthue Roth via the Jewish Book Council.