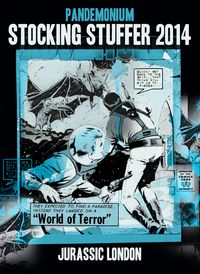 The Stocking Stuffer 2014 collects (very) short tales of starships, alien invasion and space opera - the Golden Age is back!

Celebrate with the fabled Quantum Quadrant Speed-of-Light Elite Fleet as they ring in the holiday season!

Marvel at the excitement as the Jolly Rogerer and its Space Pirate Queen go into space pirate battle!

Be amazed at the value that Sargan Fail's (almost complete) head will fetch on the open market!

Learn startling new uses for a chainsaw, as you dispose of oversized alien corpses!

Take pride as your children head off into space, eager to explore the unknown!

Dodge the laser fire and tractor beams of the Skerran fleet (by taking a nice nap)!