Stories of the Apocalypse 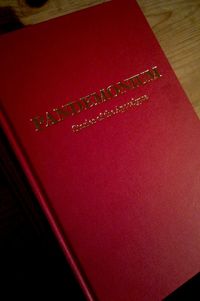 Stories of the Apocalypse features eighteen original stories set at the end of the world, as imagined by science fiction and fantasy writers. The tales are inspired by the art of John Martin, and the book was released to coincide with a special exhibition of his work at Tate Britain.

Stories of the Apocalypse was launched at Tate Britain on Friday, 4 November 2011 as a limited edition hardcover, hand-numbered and limited to 100 copies. It was bound in red buckram with gold foil stamping.

A portion of all proceeds from sales of Stories of the Apocalypse was donated to The Arthur C. Clarke Award.

A Locus e-book spotlight for October/November 2011.

Honorable Mention from The Best Horror of the Year (ed. Ellen Datow) for Archie Black's "Sadak In Search of the Waters of Oblivion".

"Martin created his extraordinary works in the 19th Century, but they wreak havoc with our imaginations still. The stories in Pandemonium certainly conjure up the same emotions as Martin's work. You can smell the brimstone, sense the oozing despair, and yet admire the fine detailing and marvellous use of colour." - Something Wicked

"Ranging from the blackly comedic to the down right harrowing, I was entranced by each and every [story].... I've read Pandemonium a couple of times now and each time I feel like I've been utterly spoiled." - The Eloquent Page

"It's not simply that there are no weak stories, it's that every one is worthwhile - moving, witty, clever or memorably horrific." - Freaky Trigger

"An excellent balance of styles and themes and there isn't a single selection that I didn't enjoy." -Africa Screams

"A collection of strong stories marked by their diversity of genre and the different slants the authors chose to take....a great first outing for this special press." - A Fantastical Librarian

"This book will leave you just a little bit jittery and not quite sure whether you're living in a nightmare or not." - Chris Farnell, Chris Writes Apocalypses

Lou Morgan's "At the Sign of the Black Dove" audio, from Tales to Terrify.

An extended interview with the contributors from The Girls' Guide to Surviving the Apocalypse.