Stories of the Smoke 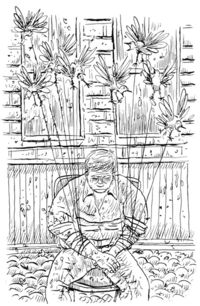 Stories of the Smoke brings you London as you've never seen it before - science fiction and fantasy in the great tradition of Charles Dickens.

Charles Dickens lived and breathed London in a way few authors ever have, before or since. In his fiction, his non-fiction, and even his own life, Dickens cast an extraordinary shadow over the city he so loved - so much so, indeed, that his name has become synonymous with a certain image of London. A London of terrible social inequality and matchless belief in the human potential; a London filled with the comic and the repulsive, the industrious and the feckless, the faithful and the faithless, the selfish and the selfless.

This London is at once an historical artifact and a living, breathing creature: the steaming, heaving, weeping, stinking, everlasting Smoke.

A portion of the proceeds from Stories of the Smoke was donated to English PEN.

Seven stories from Stories of the Smoke were selected and translated for Лондон: время московское ('London: Moscow time'), a special edition published by AST Publishing (2014, ISBN: 9785170853663).

Recommended by Liz Grzyb and Talie Helene in The Year's Best Australian Fantasy and Horror (2012): Michelle Goldsmith's "The Hound of Henry Hortinger" and Kaaron Warren's "The Pickwick Syndrome".

One of The Ranting Dragon's "5 Most Anticipated Releases" for April 2012.

"The tales are consistently entertaining, with several stand-outs." - The Guardian

"A literary feast - a fantastic sampler of cutting-edge storytelling, yes, but also a solid work that is both a unified vision of London and a swirling, kaleidoscopic voyage through and across a multiverse of Londons" - DreamPunk.me

"A strong anthology that offers something not just to SFF readers but to Dickens aficionados and London lovers as well." - A Fantastical Librarian

"This collection will take you a grand tour through the highs and lows of Victorian society right up to the present day and, in some cases, beyond. A wonderfully crafted anthology that is likely to leave any reader hungry for more." - The Eloquent Page

"Stories flow into each other, with no notably jarring examples of mood change. It also bears reading in sequence in order to appreciate the subtlety with which the overall theme, that of Dickensian fiction for the modern era, marries with a specifically Dickensian tone, namely one of warning about current social/cultural trends tempered by optimism for the future, not to mention an inherent fascination with the city of London and its potential to both elevate and corrupt those who choose or are trapped by its environs... A major success." - Stuff & Nonsense

"Plenty of gems in this book... Recommended for anyone who is looking for something that is a little different to their usual science fiction and fantasy." - Paperless Reading

"A cohesive, well-written, and tightly put together compilation. The theme of London/Dickens flows over well from story to story, with that ghostly presence that seemed to always lurk, either in the fore or the backdrop of Charles Dickens work." - Disinformed

Audio for several stories from Stories of the Smoke can be found at Dark Fiction Magazine, including: "Cuckoo", "A Brief History of the Great Pubs of London", "Uncle Smoke" and "Inspector Bucket Investigates".

Lavie Tidhar's "A Brief History of the Great Pubs of London", reprinted at Pornokitsch.

Michelle Goldsmith's "The Hound of Henry Hortinger", reprinted at Pornokitsch.

Christopher Fowler on "The Rivals of Charles Dickens"