The Brick Moon by Edward Everett Hale and Adam Roberts 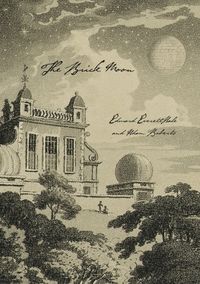 The Brick Moon (1869) is a lost classic of Victorian SF - the first tale to imagine the launch of an artificial satellite. As such, it is the perfect fictional pairing with Stars to Satellites and Longitude Punk'd, new exhibitions at the Royal Observatory.

This new edition has been carefully collected from the novel's first serialised publication in The Atlantic Monthly. Plus, it includes a new sequel - "Another Brick in the Moon" - from award-winner (and Jurassic favourite) Adam Roberts. The Brick Moon comes complete with a new, critical introduction from Marek Kukula (Public Astronomer, Royal Observatory Greenwich) and Richard Dunn (Head of Science and Technology at Royal Museums Greenwich)

"Another Brick in the Moon" by Adam Roberts

Edited and compiled by Jared Shurin

Cover by Gary Northfield, based on an aquatint from the collection of the National Maritime Museum

"Oddity seems to be the watchword for this entire enterprise. The Brick Moon is an engaging curiosity." - Vector

"The Brick Moon is about a moon made of bricks. It’s also retroactively about a whole load of other stuff as well, and while the additional material necessarily picks and chooses which aspects it emphasizes (Roberts goes fairly strong on the ‘interconnectedness is not an absolute good’ theme) their real strength is in giving you just enough momentum to set your own mental flywheels spinning.... A curio should provoke the curious, and this is and, clearly, does." - This is how she fight starts

Richard Dunn talks about The Brick Moon on the blog of the Board of Longitude project.

Adam Roberts on writing "Another Brick in the Moon".

Andrew Liptak on the significance of The Brick Moon.

About The Brick Moon and 'Longitude Season' on teleskopos.

As the 'curiosity of the month' on Bull Spec.