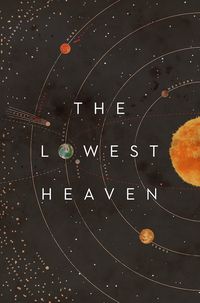 The Lowest Heaven is a new anthology of contemporary science fiction published to coincide with Visions of the Universe, a major exhibition of space imagery at the Royal Observatory Greenwich.

Each story in The Lowest Heaven is themed around a body in the Solar System, from the Sun to Halley's Comet.

The stories are illustrated with photographs and artwork selected from the archives of the Royal Observatory, while the book's cover and overall design are the work of award-winning South African illustrator Joey Hi-Fi.

Items from the Royal Observatory's collection of astronomical photography will also be on display as part of Visions of the Universe, alongside images from world-class telescopes and recent space missions. The exhibition opened in June at the National Maritime Museum.

The Lowest Heaven was launched as a limited edition of 100 hand-numbered handcover copies, available exclusively through the National Maritime Museum. The book was specially square-bound to feature the full-colour illustrations and a fold-out 'star chart' designed by Joey Hi-Fi. The book came complete with coloured endpapers and a wrap-around dust jacket.

S.L. Grey's "We'll Always Be Here" selected for the Twenty in 20 longlist - the best South African short stories published in English during the past two decades.

"Every contribution to this excellent anthology is of stellar quality." - Financial Times

"Visually beautiful with an incredibly high quality of fiction. Highly recommended." - The List

"A perfect snapshot of the state of current science fiction.... There's a lot to relish here, a lot to enjoy, and nothing that doesn't display both thought and talent." - Arc

"Published in partnership with the Royal Observatory Greenwich, [The Lowest Heaven] comes with an array of lavish photographs and drawings from the observatory's archive. It's a strong collection; the best stories veer towards fantasy rather than, as might be expected in an anthology about the solar system, the science fictional." - Guardian

"The tales act as a portrait of the different voices and approaches in today's SF, as well as proving the genre hasn't run out of ways to explore our dreams" - SFX

"Commissioned from writers from all over the world, each story is a unique, unexpected perspective on our solar system. An astute selection... that covers the range of science fiction, from the possibilities in post-apocalyptic ruined Earth to colonised planets, to aliens and alt-history scenarios." - Dawn

"The Lowest Heaven is part of an art exhibit, but it stands alone as a work of art in its own right. I wish that I could have visited the Royal Observatory Greenwich to see "Visions of the Universe," the exhibition that accompanied this fine anthology. However, I feel privileged to have gotten the chance to read it. I highly recommend The Lowest Heaven to any fan of science fiction." - Strange Horizons

"This back and forth between the actual and the fantastic underpins The Lowest Heaven's exploration of space, both as we know it and as we can only imagine it.... There can be no questioning the value of this artful anthology: it's as inspiring as it is inspired." - Tor.com

"An indispensable collection of short fiction... An incredible array of stories representing an impressive range of subgenres, settings and characters." - SF Signal

"A rich assortment of contemporary SF set in our little corner of the universe. The Lowest Heaven ranges in style and subject from space colonising and voyaging to more psychological and fantastical treatments.... makes you want to seek out more of [the authors'] work." - The Riverside Bookshop

"The whimsical, the hard-core science stories and the outright strange; overall it is a well-crafted ensemble and the solar system theme never seems like a constraint... Starburst has no hesitation in recommending it to any serious reader of science fiction." - Starburst Magazine

"The best assembled anthology to date from Jurassic London and unquestionably one of the most unique anthologies I've ever read. I would recommend every reader of this review pick up a copy." -Staffer's Book Review

"A stunning collection of short stories covering the entire spectrum of science fiction. The stories range from the more mainstream, the slightly whimsical to the more serious trappings of hard SF." -Worlds in Ink

"What stories. What imagination. What tales of wonder.... This idiosyncratic collection that fits together, somehow, like family, only without the awkward holiday dinners. Make it a point to get this book." - 100 Word Reviews

"The Lowest Heaven is an excellent anthology, one that contains stories that almost demand several rereads to unpack all of their meaning. Packaged with some lovely photographs with items from the collection of the Royal Observatory Greenwich and a gorgeous Joey Hi-Fi cover, this book is not just a lovely read but also a lovely object." - A Fantastical Librarian

The Lowest Heaven is reviewed in detail by Alex Pierce, Ian Mond and Jonathan Strahan for the Last Short Story podcast. Click here to listen to what they have to say, and learn which were their favourite stories in the collection.

Kameron Hurley's "Enyo-Enyo" in Lightspeed Magazine, plus an author spotlight.

Maria Dahvana Headley's "The Krakatoan" in Nightmare, plus an author spotlight.

An interview with cover artist Joey Hi-Fi about his inspiration, with the Collections Blog of the Royal Museums Greenwich.

An in-depth look at the cover art with A Dribble of Ink.

The Guardian on the "Visions of the Universe" exhibition - "a brilliantly gorgeous display".