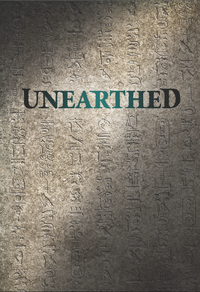 Unearthed resurrects eleven classic tales of the mummy, selected by John J. Johnston (Egypt Exploration Society) and Jared Shurin. These stories date back to the middle of the 19th century, and several have not been republished for almost two hundred years. They have all been carefully edited and reformatted to accurately represent their original publication quality.

Unearthed comes complete with a lengthy introduction from John J. Johnston, outlining the mummy's presence in literature and pop culture, from the monster's first appearance in print to its latest on screen.

The companion volume to The Book of the Dead, Unearthed is published in partnership with Egypt Exploration Society, the UK's oldest independent funder of archaeological fieldwork and research in Egypt, dedicated to the promotion and understanding of ancient Egyptian history and culture.

A portion of all proceeds from sales of Unearthed are donated to the Egypt Exploration Society.

John J. Johnston's "Unearthing The Book of the Dead" on Tor.com.

Read the award-nominated introduction,  "Going Forth by Night", at academic.edu.

Monstrous Antiquities: Archaeology and the Uncanny in Popular Culture, a conference at UCL Institute of Archaeology, 1 - 3 November, 2013. With talks by John J. Johnston and Louis Greenberg, amongst others.